Anyone recognize this border engraving? The gun is unmarked.

It will, I fear, be almost an impossibility to pin this down to a particular engraver or gunmaker.

The gun would appear to be a typical between the wars Birmingham boxlock with minimal bead engraving. This style was popular in the late 1920s when the economic situation was not good and shows of extravagance frowned upon. The vast majority of Birmingham guns were built by a platoon of independent outworkers, which doesn't help when tracking down makers.

I have a Clarke of Leicester BLE with similar minimal border scalloped engraving, as pictured below. Clarke made most of their own guns, though by the late 1920s, most parts were being bought in in the white from Birmingham. 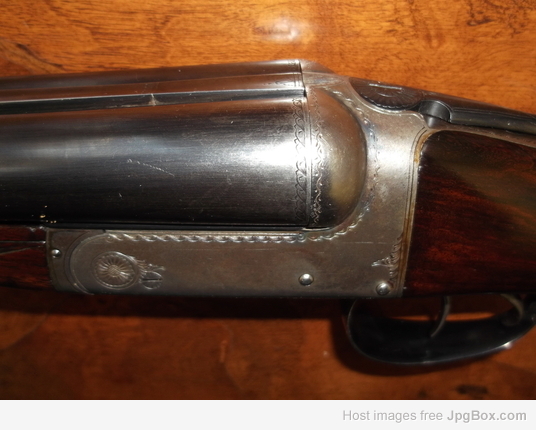 Thanks Tim! I’ve seen the same style engraving on a few Lincoln Jeffries of the same style and thought if there were info on Jeffries suppliers I could pin down a maker or firm. I’ve scoured guntader and gunstar auctions and Jeffries is the only retailer I’ve found that had guns with that closed loop border engraving. There were a few Midland guns that were close in style.
Top
Post Reply
3 posts • Page 1 of 1