by Daryl Hallquist 59
Is anyone familiar with this maker/seller ? It has the William Ansell patent , which I have not seen before. No address on the gun, but some records might point to South Africa. Case seems original, but am not sure. Newcastle on the case label. Pape marked oil bottle. 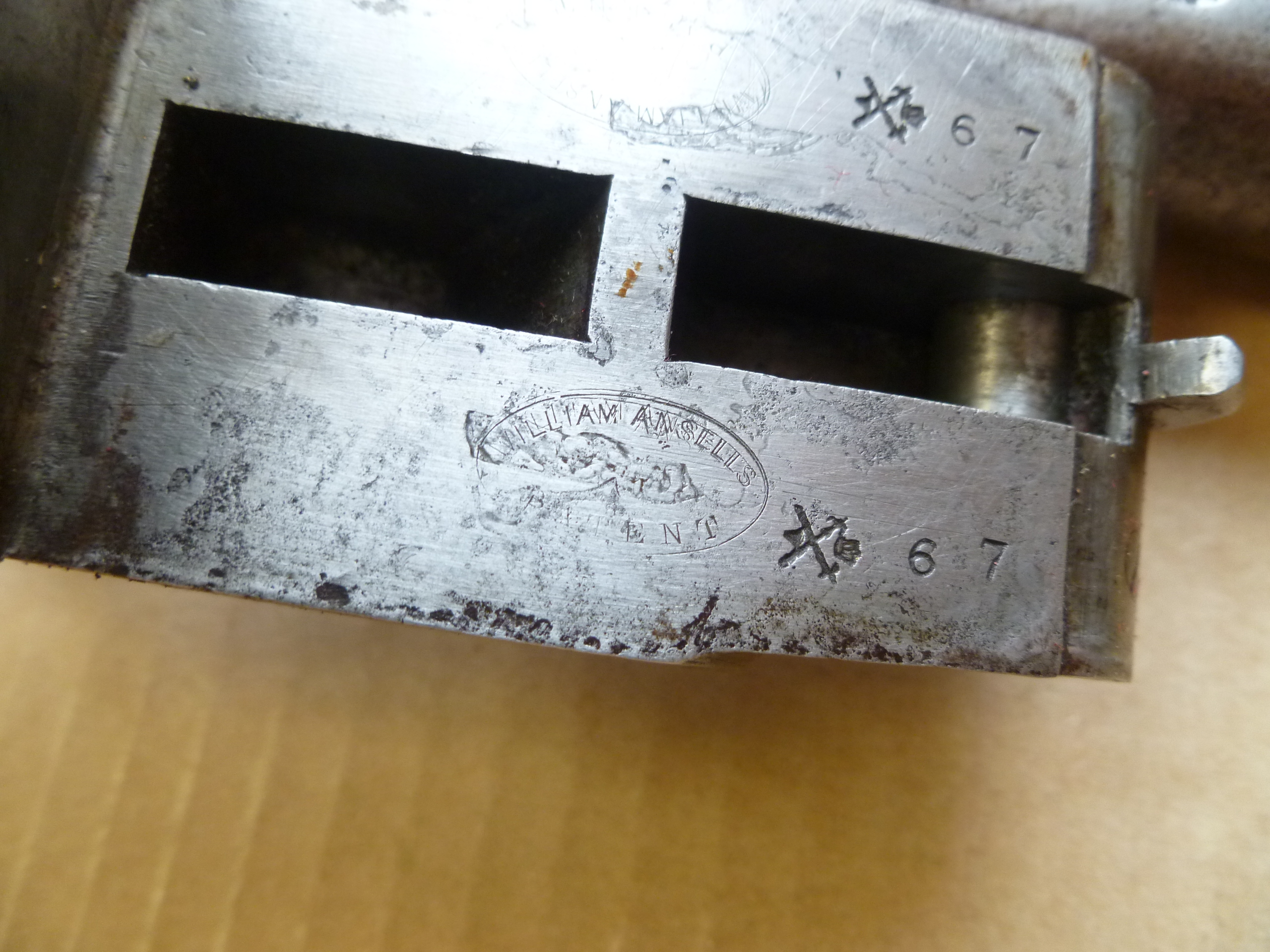 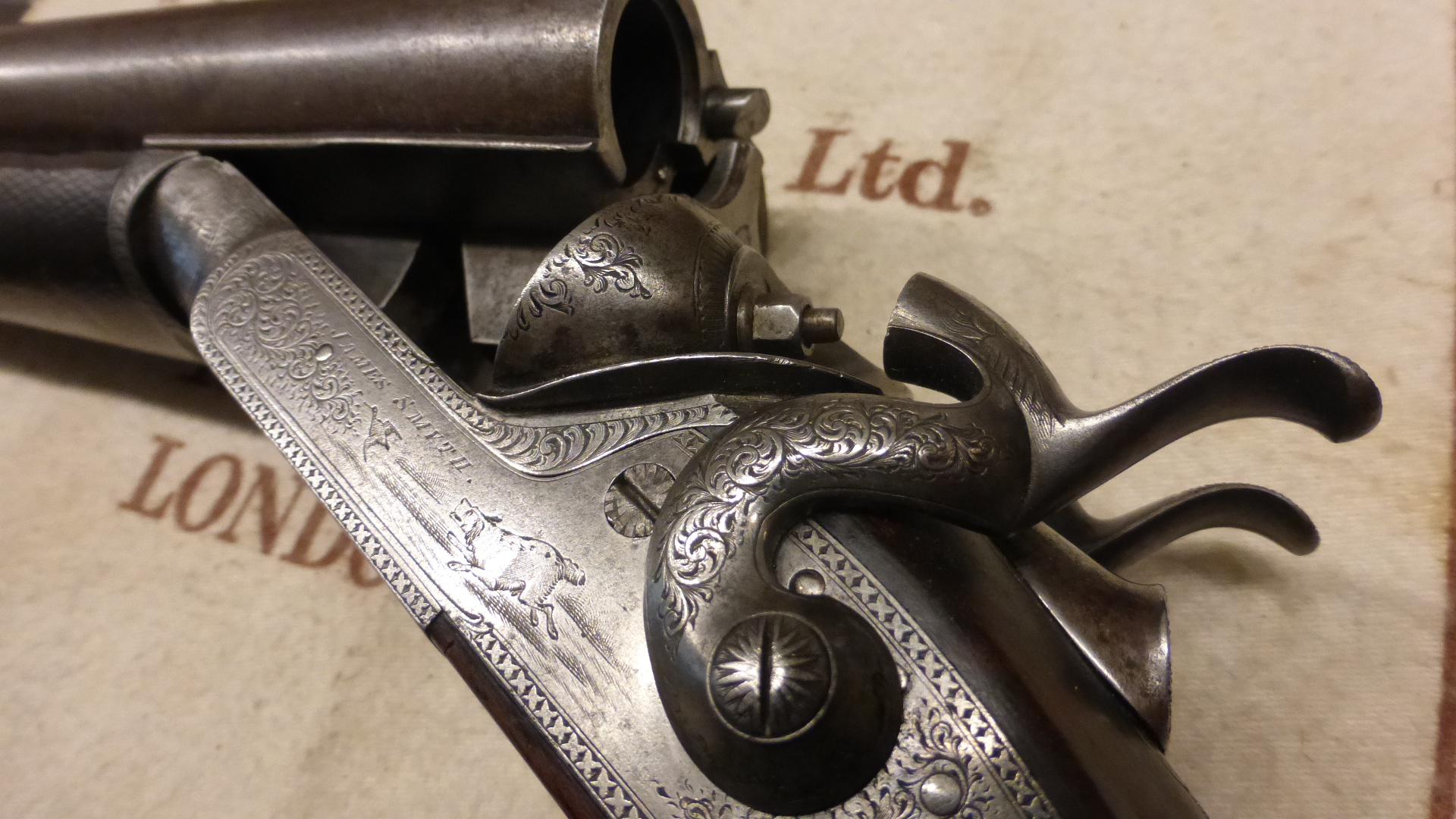 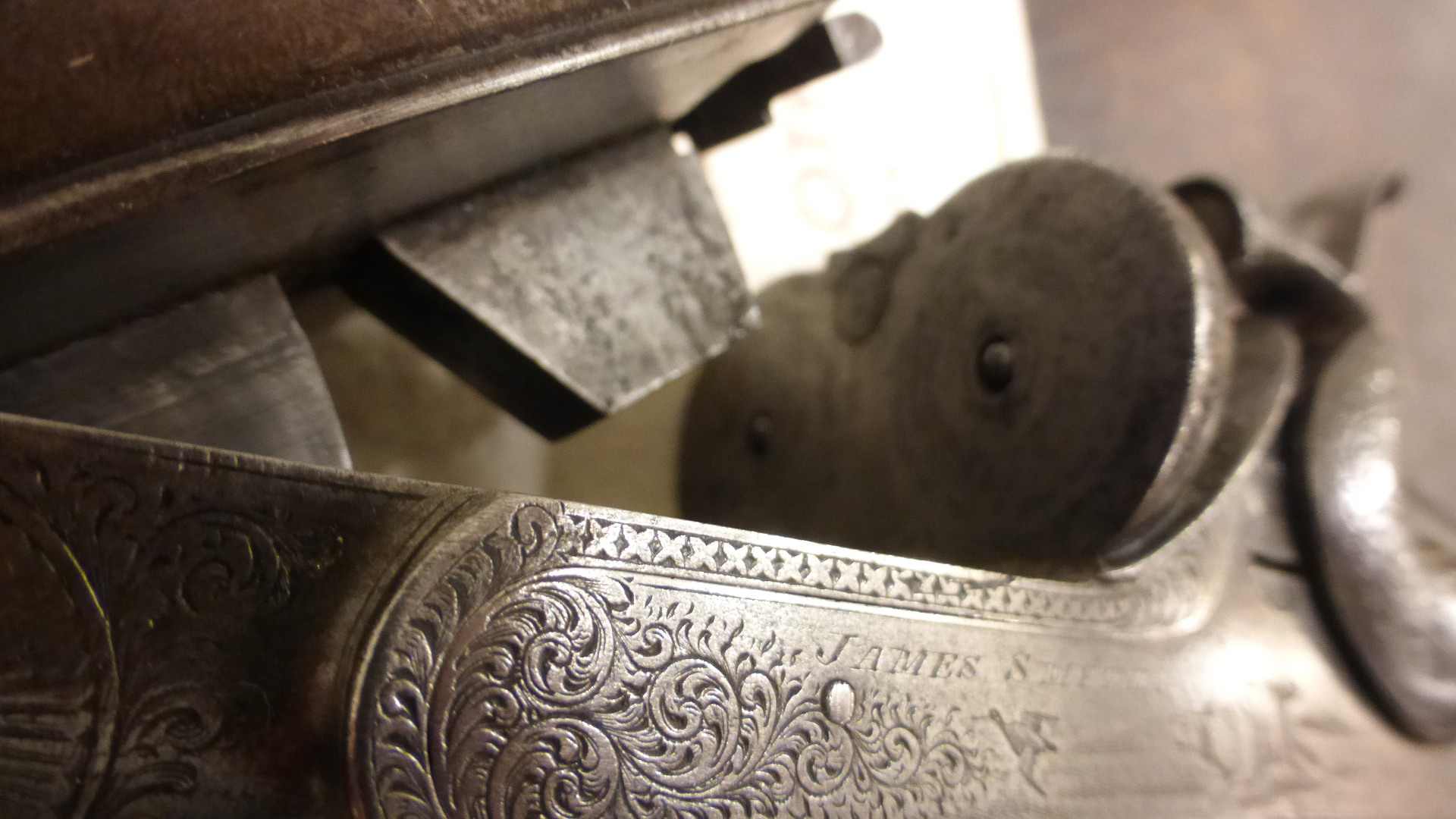 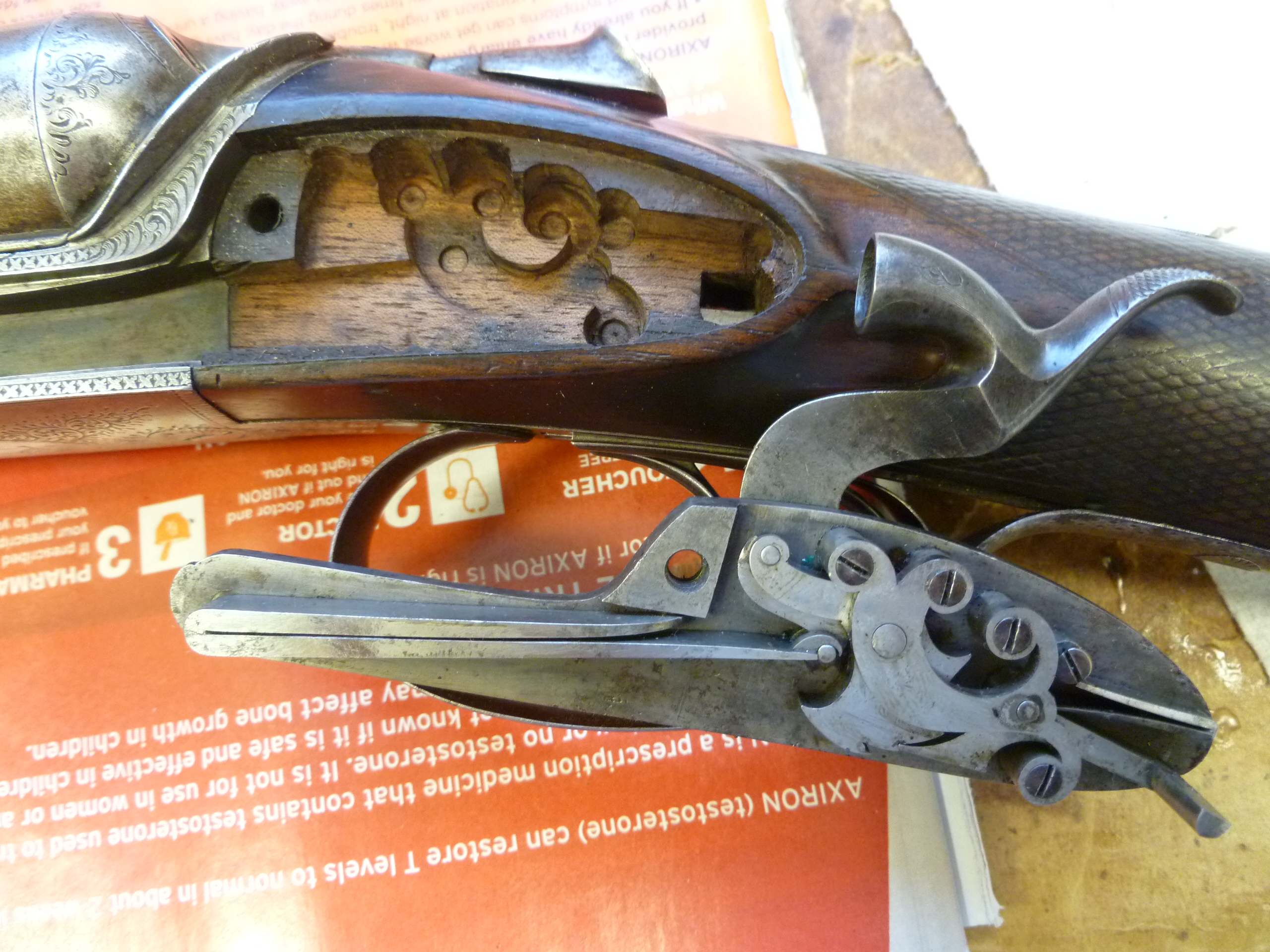 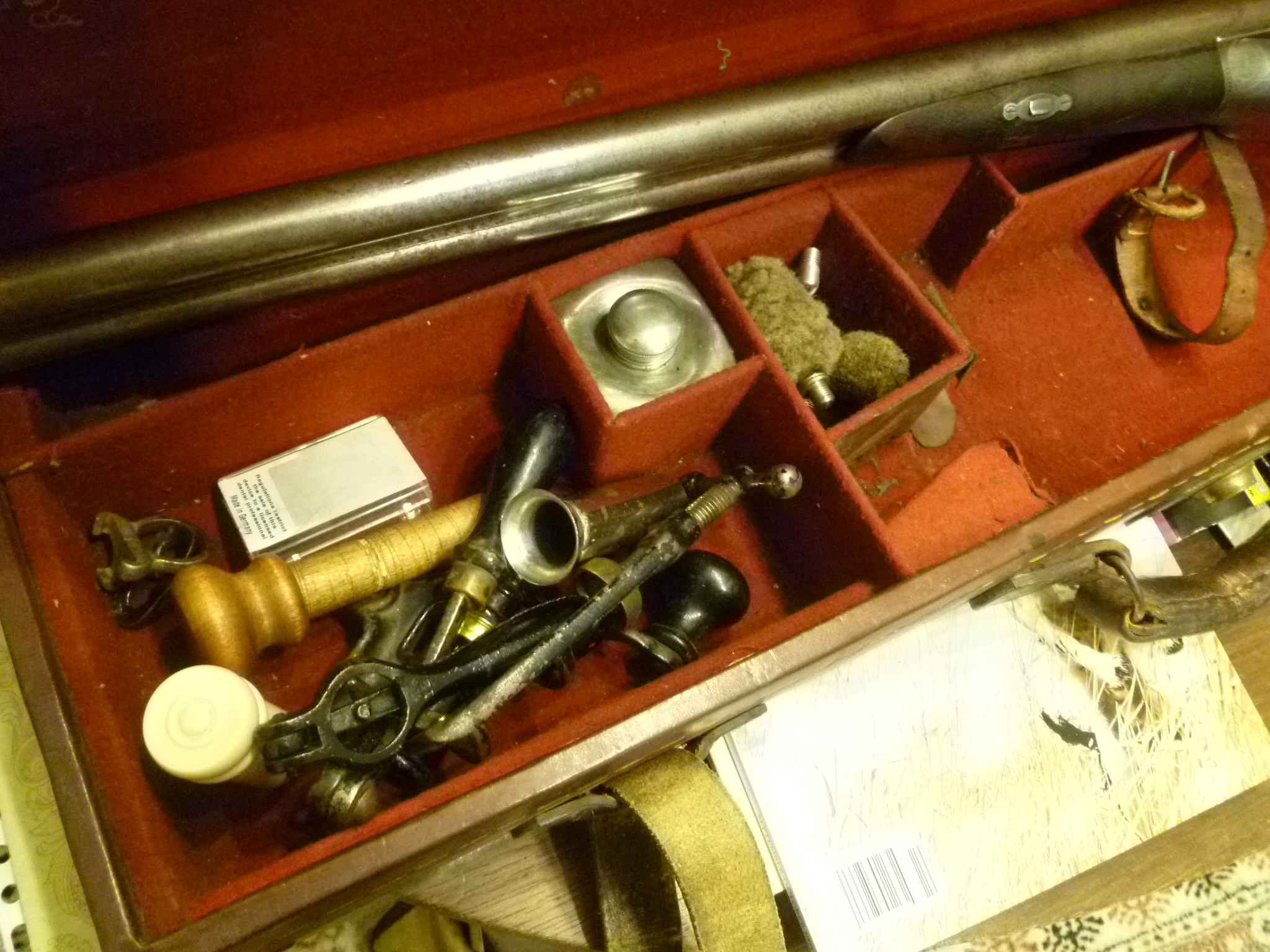 by John 39
Our list of South African gun makers is comprehensive but a James Smyth is not listed. However, the William Ansell history mentions that C A Ansell of Bloemfontein was probably related. Several gun makers in South Africa were short lived businesses and James Smyth may have been one of them.

We also have not seen this patent reference before, but William had two patents in 1871 for a thumb operated release mechanism and we don't know which one this is.

The only proof mark shown is a view mark, We wonder what is shown under the barrels?

You mention Newcastle is on the case. What does it actually say?

by Daryl Hallquist 59
Gentlemen, thanks for your thoughts. My apology for my faulty memory on the case label. Looking at the Wanless information on this site suggests the case is a later addition to the gun, and also gives some hints as to what the label reads.

The label reads as best that I can tell,
Wanless Bros.
Gun and Rifle Makers
Sunderland
South Shields
and
Stockton on Tees

I have attached a few more pictures including under barrel marks. No marks appear on the barrel flats. I assume the initials J.C. on the under rib might be the maker, but I don't have a guess as to who that might be . 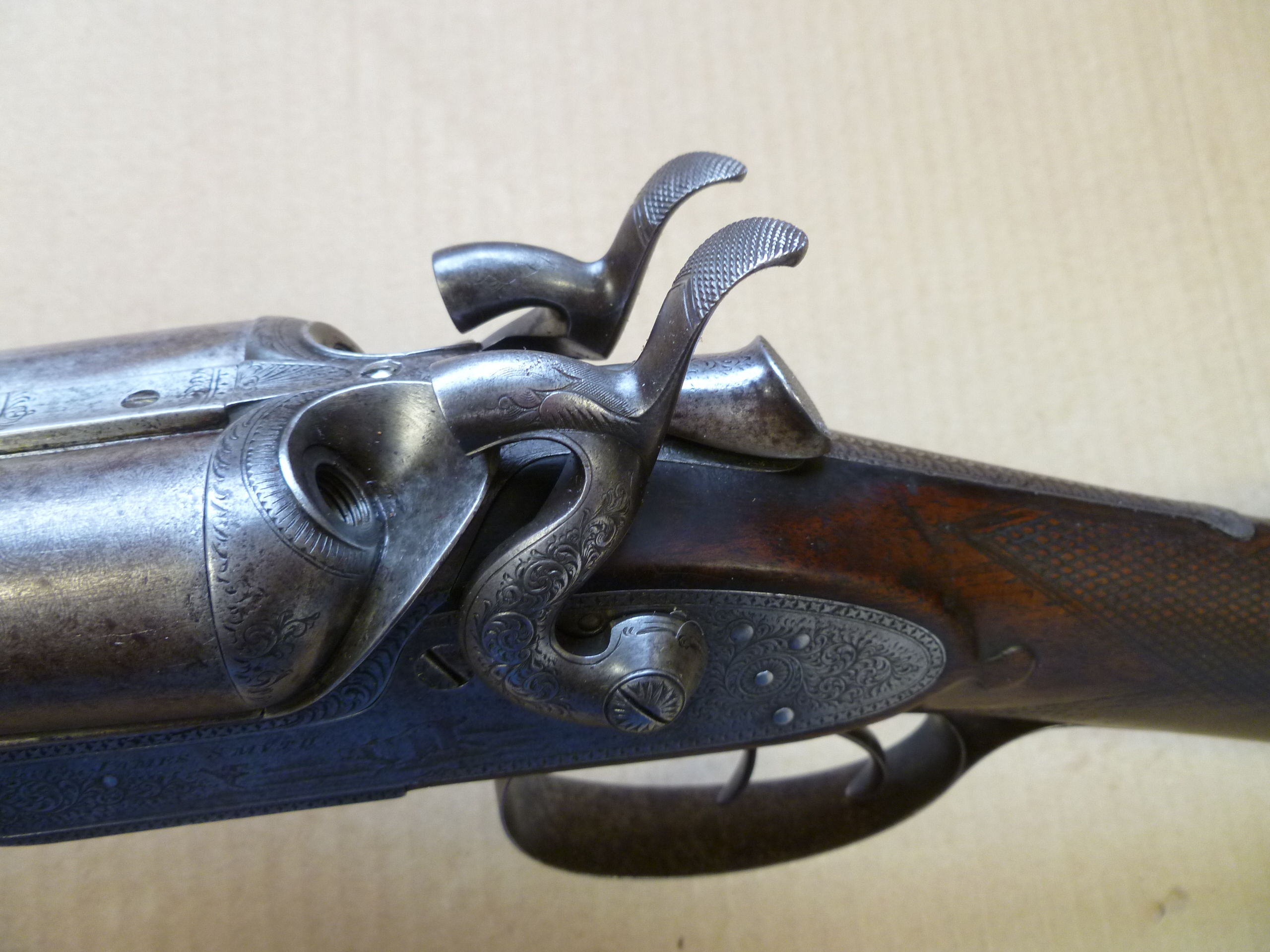 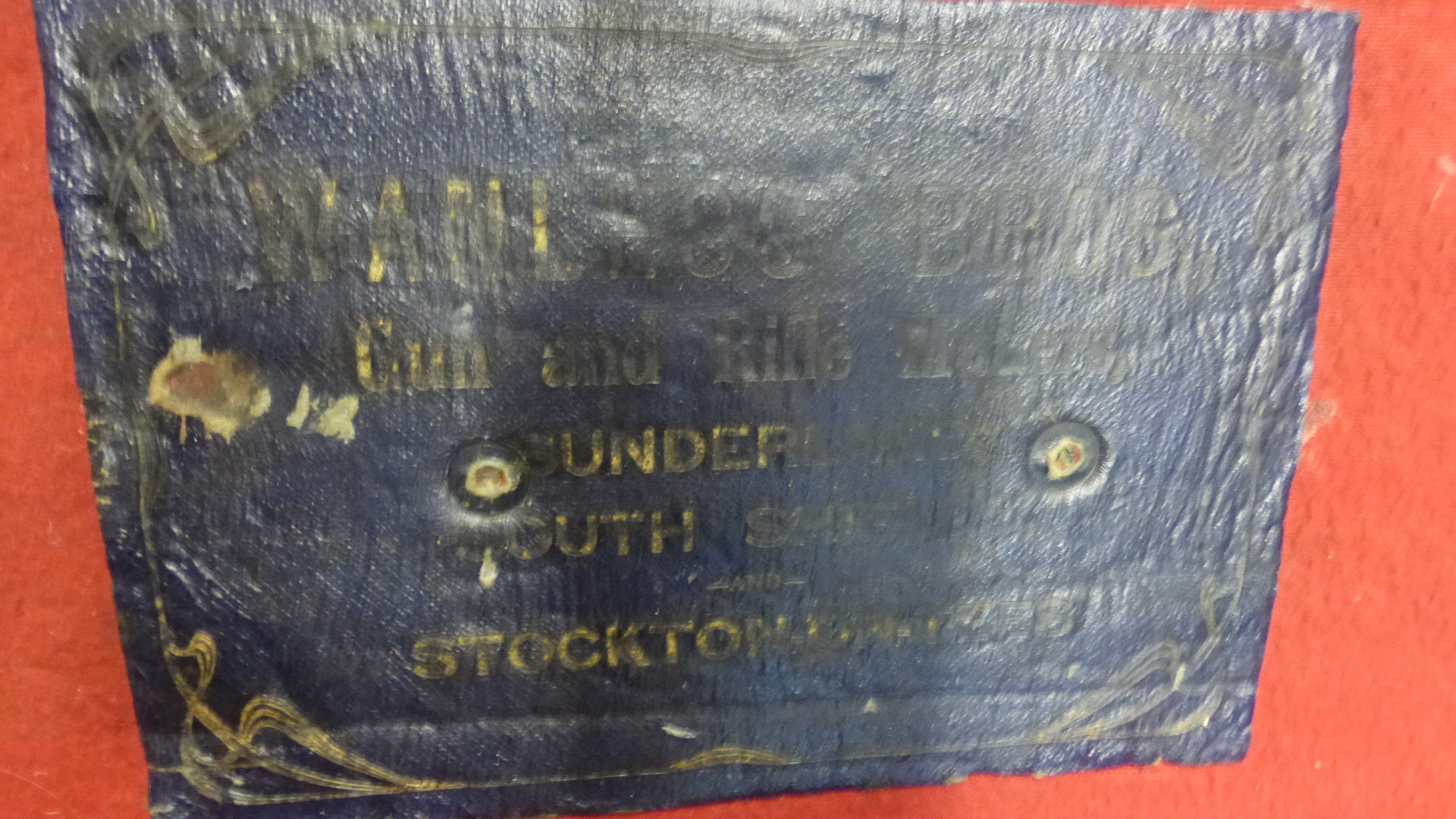 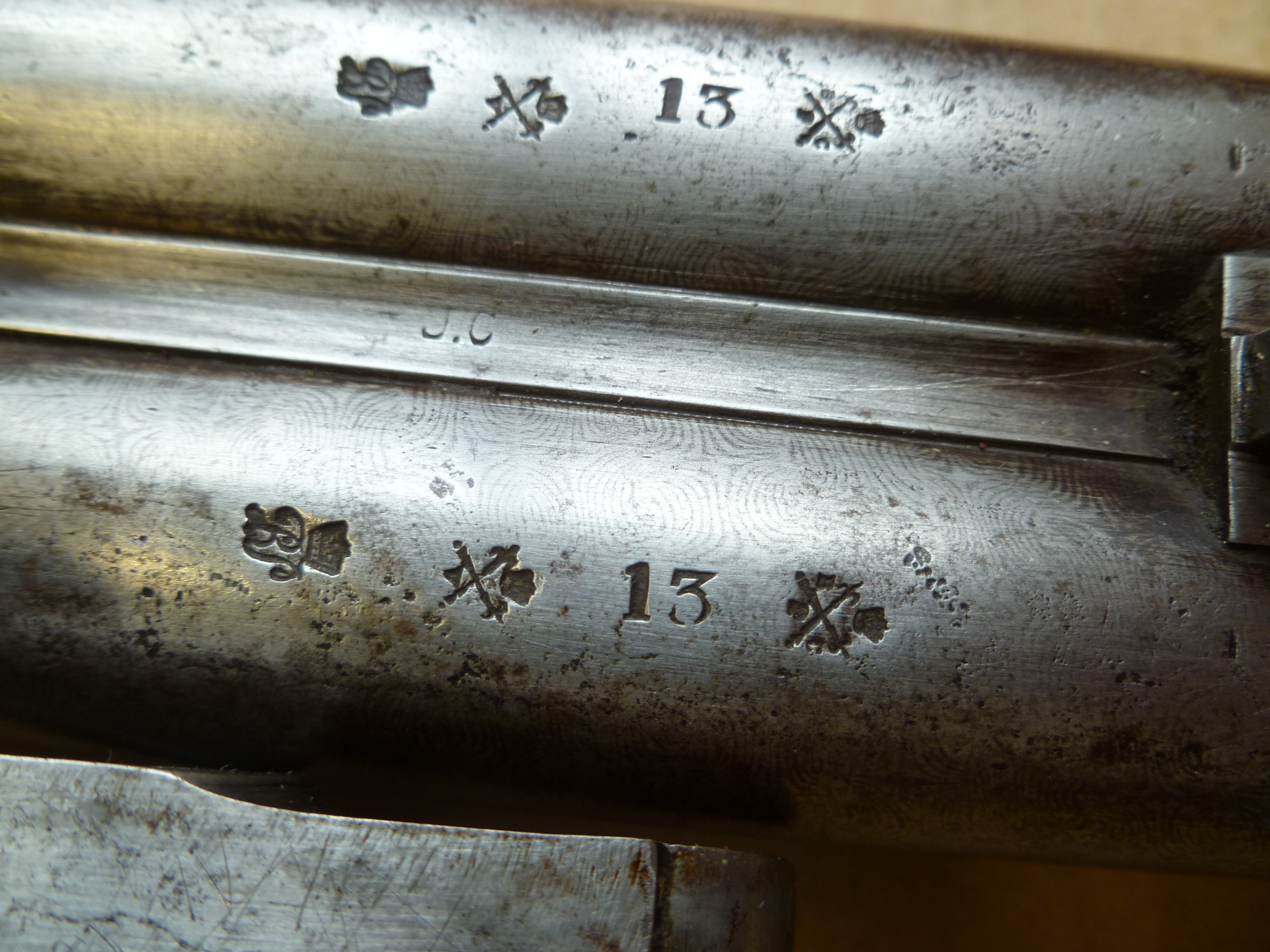 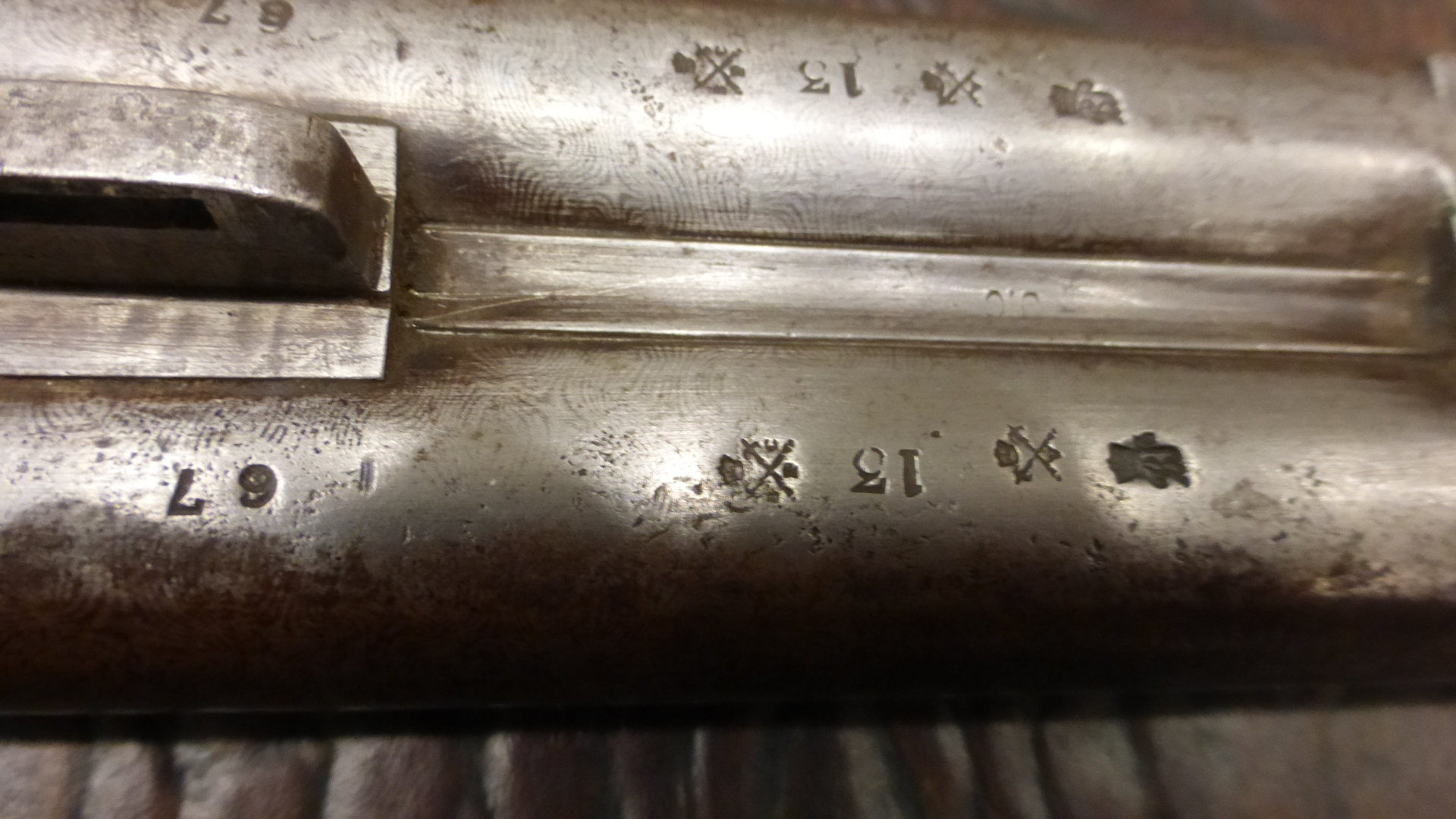 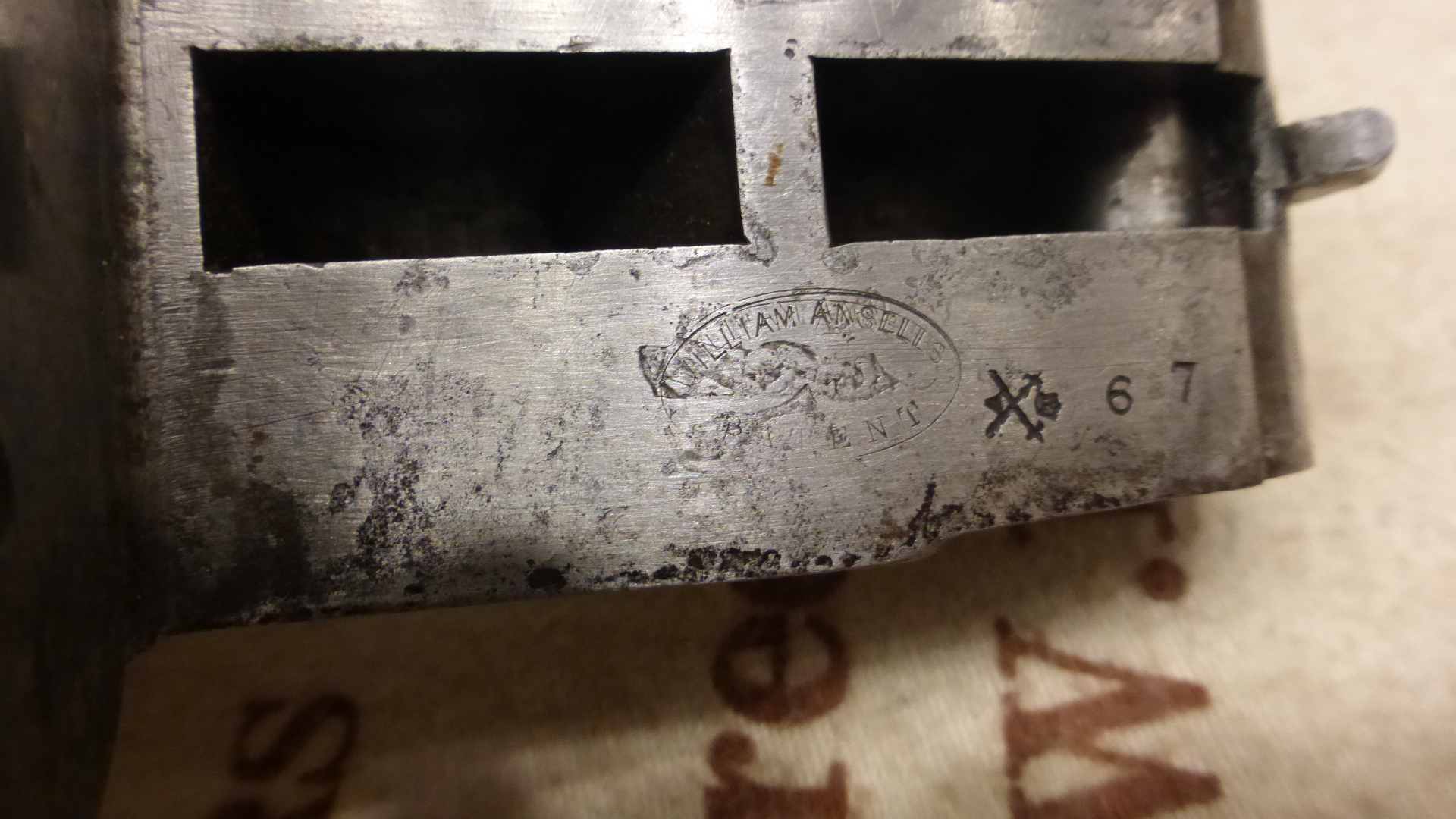 by John 39
J.C. could be the gun maker or the barrel maker. 67 seems to be the gun's serial number - very low, possibly a small Birmingham trade maker! Wanless could have sold the gun second-hand but more likely that the gun and case were separate items.

by Daryl Hallquist 59
John, thank you. You jogged my memory with the Ansell name related to South Africa. That is why I guessed that Smyth could be from there. No reason other than that for my guess.

On the case. It fits the gun so perfectly and the wear marks are consistent with the gun, I suppose Wanless could have cased it and sold it second hand. By the way, the gun and case were found in Canada.

Stephen, the gun unlocks with a push button that you see in the picture. Pushing the button forward pushes a pin out of a recess hole in the standing breech, back into the barrel breech below the top rib. The pin is spring loaded and reenters the standing breech when the gun is closed.

by David Ryder 107
Is there any information on the rib?

by Daryl Hallquist 59
David , your idea is a good one. I have looked on the rib and see there is some printing in very tiny, light letters. Unfortunately, the letters are so faint and worn that I have been unable to read them, even by taking a super close up macro lens and then expanding the pictures. The story may be there, but at this time I cannot read it. Any suggestions would be welcome.

by David Ryder 107
A £4 uv torch might help enhance the shallower marks.
All times are UTC
Page 1 of 2